October 16th, 2020
“The pandemic has provided us, in pharmacy associations, an unprecedented opportunity to collaborate. In the pandemic, fourteen national associations have come together –  and we work together at least every week on how are we going to make sure that the pharmacy profession has been positioned effectively to take advantage of the opportunities that this pandemic has unfortunately or fortunately presented.”
- Dr. Lucinda Maine 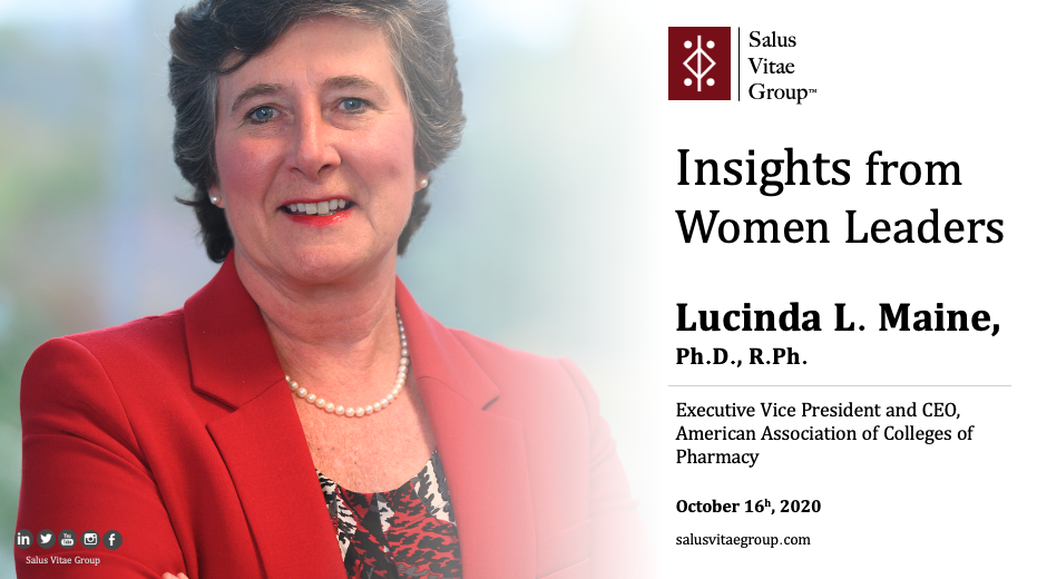 Dr. Lucinda L. Maine serves as executive vice president and CEO of the American Association of Colleges of Pharmacy. Prior to assuming her current role in July 2002, Maine served as senior vice president for policy, planning and communications with the American Pharmacists Association (APhA). Maine has been active in leadership roles in and out of the profession. Prior to joining the APhA staff she served as speaker of the APhA House of Delegates and as an APhA trustee. She has been honored with several prestigious awards, including the University of Minnesota Outstanding Alumnus Award, the Linwood Tice Friend of APhA-ASP Award and the Gloria Niemeyer Francke Leadership Mentor Award from the American Pharmacists Association. In 2017 she was installed in the Alabama Pharmacy Hall of Fame. In March 2019, Lucinda received the Remington Honor Medal, the professions’ highest honor presented annually by APhA.
Upcoming Events 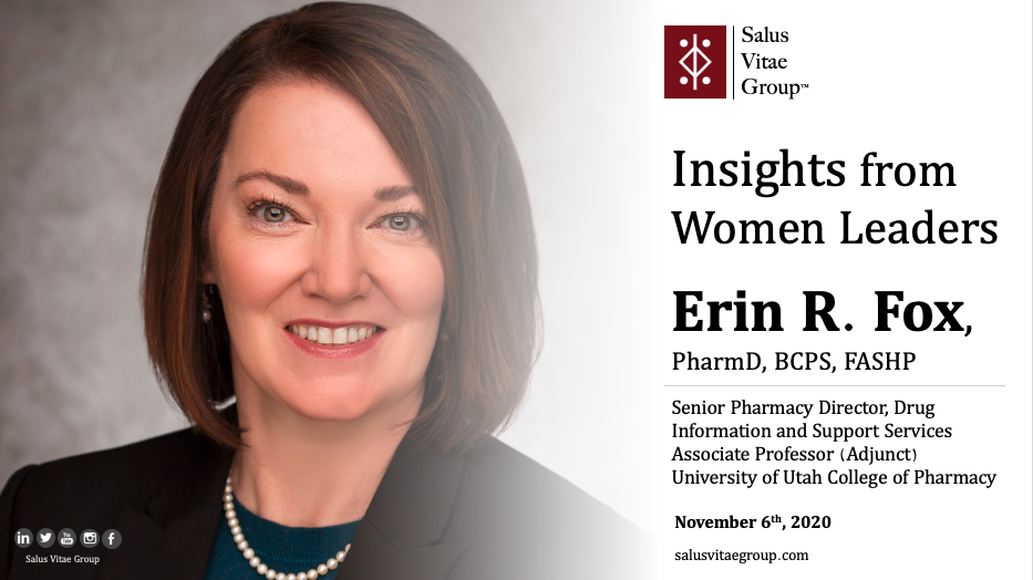 Dr. Erin Fox is senior pharmacy director of Drug Information and Support Services at the University of Utah Health Care and Associate Professor (Adjunct), at the Department of Pharmacotherapy, University of Utah College of Pharmacy. She is active in both state and national pharmacy and health-related societies serving in a variety of volunteer and elected positions. The University of Utah Drug Information Service provides content for the American Society of Health-System Pharmacists (ASHP) Drug Shortage Resource Center with some support from Vizient. She serves as a media resource and advocate for changes to improve the ongoing drug shortage situation and rising drug costs. In December 2015, Dr. Fox testified for the Senate Aging Committee regarding the impact of sudden price increases on health systems. She is recognized as an expert in drug shortages and has received the ISMP Cheers Award and ASHP Award of Excellence in recognition for her work on drug shortages. She has also received the ASHP Award of Excellence for raising awareness about the problem of increasing drug prices and was recently honored with the William A. Zellmer lecture award for her advocacy efforts. 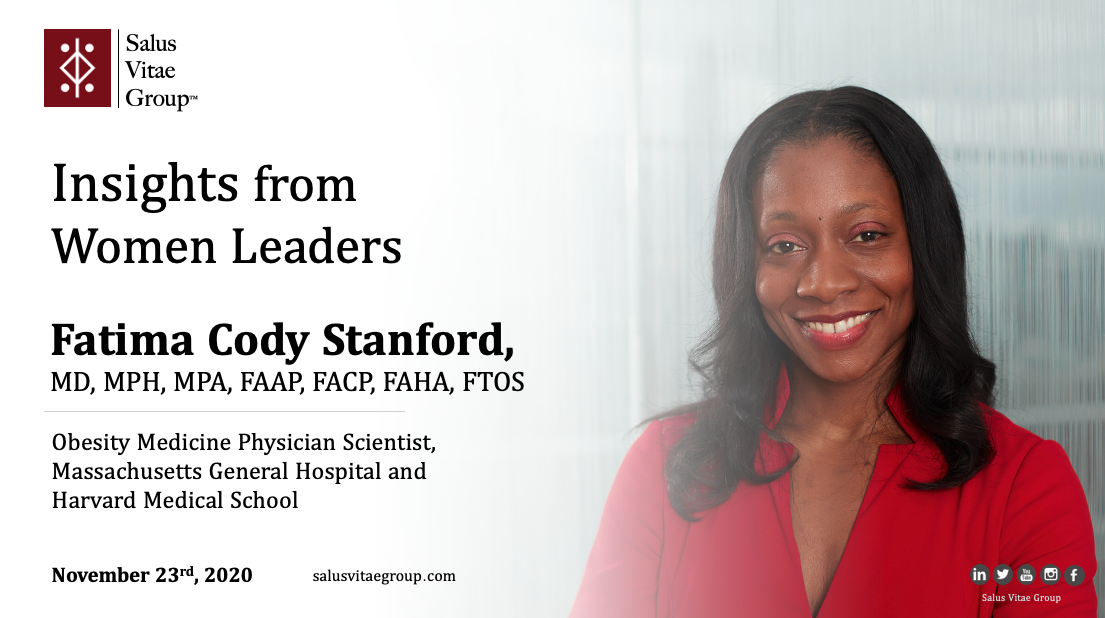 Dr. Fatima Cody Stanford practices and teaches at Massachusetts General Hospital (MGH)/ Harvard Medical School (HMS) as one of the first fellowship-trained obesity medicine physician in the world. Dr. Stanford received her BS and MPH from Emory University as a MLK Scholar, her MD from the Medical College of Georgia School of Medicine as a Stoney Scholar, and her MPA from the Harvard Kennedy School of Government as a Zuckerman Fellow in the Harvard Center for Public Leadership. She completed her Obesity Medicine & Nutrition Fellowship at MGH/HMS after completing her internal medicine and pediatrics residency at the University of South Carolina. She has served as a health communications fellow at the Centers for Disease Control and Prevention and as a behavioral sciences intern at the American Cancer Society. Upon completion of her MPH, she received the Gold Congressional Award, the highest honor that Congress bestows upon America’s youth. Dr. Stanford has completed a medicine and media internship at the Discovery Channel. An American Medical Association (AMA) Foundation Leadership Award recipient in 2005, an AMA Paul Ambrose Award for national leadership among resident physicians in 2009, she was selected for the AMA Inspirational Physician Award in 2015. The American College of Physicians (ACP) selected her as the 2013 recipient of the Joseph E. Johnson Leadership Award and the Massachusetts ACP selected her for the Young Leadership Award in 2015. She is the 2017 recipient of the HMS Amos Diversity Award and Massachusetts Medical Society (MMS) Award for Women’s Health. In 2019, she was selected as the Suffolk District Community Clinician of the Year and for the Reducing Health Disparities Award for MMS.
More coming soon

October 23rd, 2020
“When you’re in a boardroom and you’re the only woman speaking for a whole bunch of women that don’t get to sit there because they haven’t had the opportunity – when you look at every aspect of our lives there are things that you will bring to the table that you can represent that are not being represented.”
​– Dr. Sandra Leal 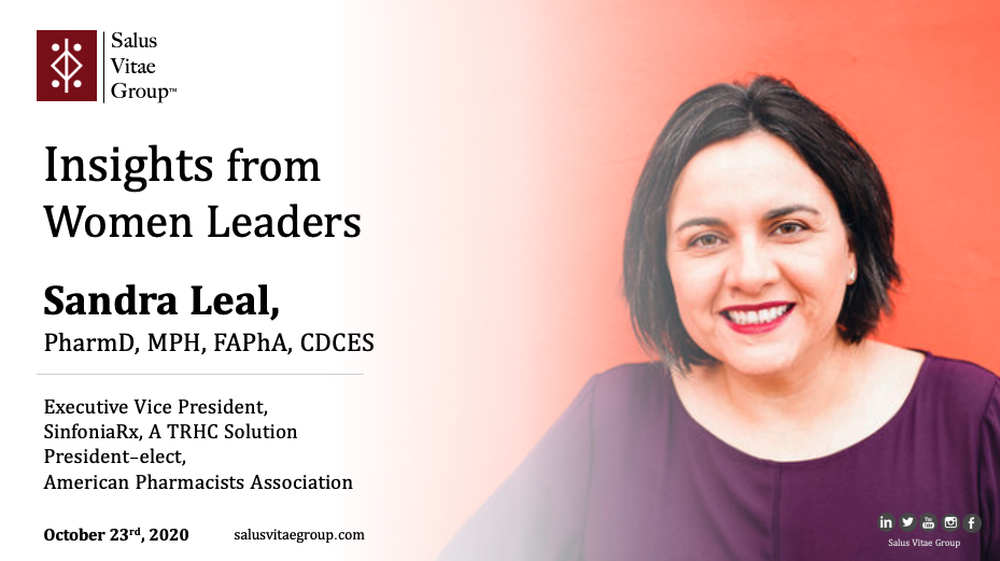 Dr. Sandra Leal is the Executive Vice President for SinfoníaRx, A TRHC Solution. Dr. Leal is responsible for oversight and expansion of progressive pharmacists’ services that focus on outcomes, access, and quality. Her work has been published in Diabetes Care, Advances in Chronic Kidney Disease, American Journal of Health- System Pharmacy, Journal of the American Pharmacists Association, Annals of Internal Medicines and a discussion paper published by the Institute of Medicine entitled, “Patients and Health Care Teams Forging Effective Partnerships”. Her programs are a two-time recipient of the American Pharmacists Associations (APhA) Foundation Pinnacle Award, ASHP Best Practice Award in Health-System Pharmacy and the National Association of Community Health Centers Innovative Research in Primary Care Award. Dr. Leal was recognized as APhA’s Good Government Pharmacist-of-the-Year for her advocacy work on pharmacist provider status and was installed as President-Elect for the American Pharmacists Association for the 2020-2022 term.
Host 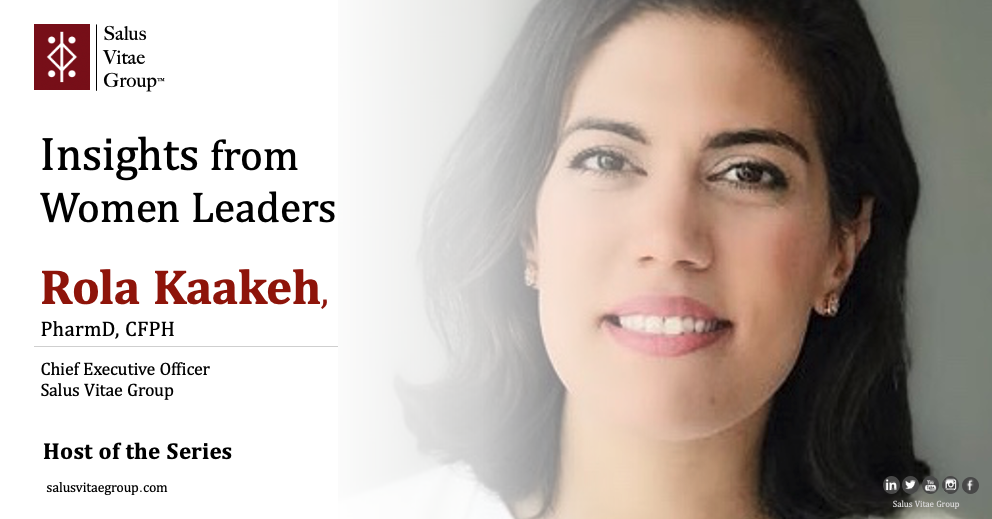 Dr. Rola Kaakeh the CEO of Salus Vitae Group. She is a fellowship-trained, licensed pharmacist with over thirteen years of experience in various settings (pharmacy practice, managed care, health systems, administration, public health and higher education). She teaches at Northwestern University Feinberg School of Medicine and is also affiliate faculty at the Northwestern University Institute for Global Health and Institute for Public Health and Medicine. She advises organizations globally on health system development, and has engaged with various institutions within the public and private sectors, non-governmental agencies such as the United Nations, universities, startups, and professional associations.  Her work highlighting the burden of drug shortages in the US has been cited over 200 times and used as supporting data for national policies and regulations.  She has presented on numerous global, impactful stages to address the most pressing issues of our time – including her recent TEDx on “The Struggle to Access to Medications.” She has received a number of awards and is actively engaged with the community and the profession on a local, national and international level in several capacities to numerous professional and nonprofit organizations. Dr. Kaakeh started university at the age of 10 as a gifted child, holds a Doctorate in Pharmacy with a minor in Organizational Leadership from Purdue University, and completed a Post-Doctoral Fellowship in Pharmaceutical Outcomes and Health Services Research from the University of Michigan School of Public Health, College of Pharmacy, and the School of Medicine. In addition, she holds several healthcare licenses and certifications.